[Tweaking your job to suit your personality]

Google had a problem. While the software engineers were happy with their creative jobs, other employees in jobs like sales or admin were less than happy. What could be done about this?

Organisational Psychologists hypothesised this was i) because people saw their job as something ‘fixed’ and ii) because they felt their job did not allow them to really be themselves. So they ran a workshop during which they encouraged employees to try to see their job as something flexible: was there something they could change perhaps? Or something extra they could do? The idea was to find ways to align their job with their own preferences or talents. People were prompted to explore various possibilities, and they did:

So, was the workshop a success? To check this, the researchers measured the participants’ levels of happiness and performance before and after the intervention. Six weeks later, there was a clear increase in both metrics compared to a control group.

Buoyed up by this success, the researchers ran another workshop. This time they encouraged participants to think of both their job and their skills as malleable. Again, they noticed the same spike in both productivity and well-being. In addition, participants were 70% more likely to get a promotion! (A. Grant ‘Originals’ – p. 25) The moral here is that we often tend to see our professional reality as set in stone, when in fact it need not be.

So what about us then? Having talked with countless colleagues in ELT, I know that many of us are not as happy as we could be at work. Well, why not try tweaking our jobs a little? For instance…

Your job is more ‘craftable’ than you think it is; if your reality is not what you would like it to be, change it.

The Moral: Your job is not set in stone; sculpt it to suit who you are. 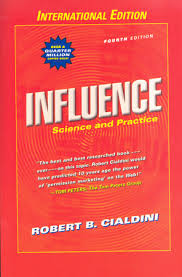 OK – quick Q: you are a shop assistant in a clothes store. You work on commission. A customer walks in and asks for a suit and a pullover. Which do you show them first? (A: at the end!)

‘Influence’ is considered to be The Bible of persuasion, and rightly so! What sets Cialdini apart from most other academics is that he wanted to see how people try to influence in others the real world. He therefore worked for estate agents, politicians, in a restaurant and in advertising. His book analyses his findings – 6 key principles:

OK – remember the initial Q? A: you show them the suits first! (p. 13) Why? If you show them the pullovers, they will buy an average-priced one (say E 50) but when you take them to the suits, they will suddenly seem expensive, so they’ll get a cheaper one (say E 150). Yet if you take them to the suits first, they will buy a normal one (say for E 200) and then the pullovers will seem cheap by comparison, so they’ll get one at E 70! Brilliant!  🙂

* Here is a study on Concensus: 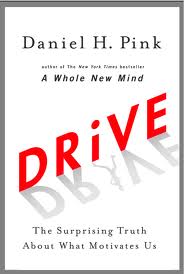 Pink sets out to demolish long-held beliefs such as that people are only motivated by extrinsic factors and he does so with gusto. While primarily focusing on the business world, most of the things he says apply directly to education as well.

Pink starts by making a useful distinction between ‘algorithmic’ and ‘heuristic’ tasks (p. 29). The former are ones which you perform by following a series of pre-determined steps, while the latter require a more creative approach. Crucially, the latter are far more motivating!  In our field this would translate into a distinction between, say, the standard transformation exercise and an activity like improvising and recording a monologue. The big Q for us is: what is the ratio between these two types of activities in our classroom?

Later on, Pink draws on Csikszentmihalyi’s insights on ‘Flow’ (p. 115). Csikszentmihalyi’s research showed that most tasks where people achieved ‘Flow’ shared three key elements: a) there were clear goals,  b) there was immediate feedback and  c) the task difficulty level was perfectly pitched – slightly higher than the performer’s current level. The implications for task design here are obvious…

In discussing ‘extrinsic’ vs ‘intrinsic’ motivation, Pink points out that there is often a trade-off; extrinsic factors may work best in the short-term, but in the long run intrinsic motivation is always the winner! (p. 79) Back to ELT, exam classes illustrate this perfectly: granted, both parents and students often clamour for more exam-oriented material as there is always a test round the corner, but in the long run this is disastrous (I have yet to meet students who do CPE tests for fun after getting their certificate…)

Motivation leads to ‘autonomy’ and this is where things get really exciting! On p. 86 we are introduced to the concept of ROWE (‘Results-Only Work Environment’). The idea is simple: your employer does not care how or when you do something, so long as you deliver the goods! Now imagine ROSE instead! Imagine a school where classes are not compulsory, where students are more autonomous and they have to actually generate something as evidence of learning (rather than sit endless tests). This is not a dream; the IB model has taken many steps in that direction…

Then on p. 93 we go one step further still! Atlasian is a software company where once a week employess can do anything they want!! At the end of the day, employees just show what they have come up with. Now, can you imagine a school where once a week you can work on any project you want? Imagine being paid to design your favourite activities, to incorporate novel IT-based task in the syllabus or prepare worksheets for ‘Comedy for ELT’ sketches? Sheer bliss! 🙂 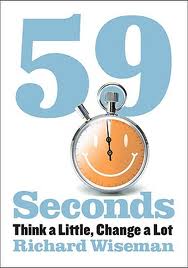 Knowing how busy we all are, Professor Wiseman set himself the task of summarising a huge amount of accumulated Psychological knowledge in ten short chapters, the summaries of which one can read in 59 seconds flat! Topics covered include ‘Happiness’, ‘Attraction’, ‘Personality’ but also ‘Creativity’, ‘Motivation’ and ‘Persuasion’. Readers are not disappointed.

Looking at ‘Happiness’ first, surely there is nothing wrong with using activities which both help the students’ English and make them happier into the bargain? On p. 20 we are introduced to a rather unusual diary writing task, in which students are asked to think back to great times in their past, reflect of the many things they can be grateful for, and imagine fabulous times in the future. Putting things into perspective and creating a healthy ‘narrative’ about your life has been found to make people considerably happier.

The section on ‘Happiness’ contains some amazing, ready-to-use activities for the ELT classroom. In a task which would warm the hearts of all humanist educators (p. 30), psychologists got groups of children to write nice things about each other and present their classmate with their ‘plateful of praise’. Not only does this contribute to overall feelings of wellbeing, it has the additional advantage of boosting class cohesion.

There are implications for teachers in almost all chapters. In the one on ‘Persuasion’, Wiseman quotes a study in which four charity boxes were placed in large stores (p. 70). Each one bore a different message. The most successful one was ‘Every penny helps’ (62% of all takings!) Researchers thought that people often refrained from giving as they thought their contribution would not make a difference and the message countered this. Could it be that our students feel the same? I believe that if we get them to do little things, this might lead them to try harder later.

‘Liking’ is of course a crucial component of persuasion. On p. 52 Wiseman reminds us of the advice of Dale Carnegie: ‘to increase your popularity, just express a genuine interest in others’ (funnily enough, it does not have to be genuine; if we keep on faking it, the ‘genuineness’ comes later!)  This is a good reminder for us that so-called ‘humanistic’ activities are not just for the learners; students do appreciate it if we find out things about them and we take the trouble to ask them how their sick dog is doing…

And speaking of ‘Liking’, here is an amazing discovery (p. 177) – people bond more readily when they share negative attitudes than when they share positive ones! So next time your students heap insults on the referee who awarded that penalty against the Greek national team, do not forget to chip in with a couple yourself… 🙂

Scott is being considered for promotion and he turns up for the interview. Everything is normal, except that among the three people he has to face there is a guy who is constantly sarcastic and who keeps hurling abuse at him. The bemused interviewee learns that this is done deliberately so that they can see how he copes with ‘Extreme Negative Feedback’. A hilarious little clip from the brilliant comedy duo Mitchell and Webb. Level: C1 – C2 Topic: Business / Work / Interviews.

To see the SCRIPT, just click under the video where it says ‘Show More’.
To download a free handout (with ACTIVITIES, the KEY and the SCRIPT just click here).

‘Learning a language is the simplest thing in the world. The principle is tried and tested: habit formation. You listen to the phrase, you repeat the phrase, you learn the phrase. Easy – peasy’. Methodological objections aside, it helps if you actually repeat the right phrase… 🙂

Another hilarious sketch from the series ‘The Sketch Show UK’.