The study design was amazing: subjects (both M and W) were invited to the lab. They worked individually. The instructions were simple – ‘You just sit in front of a computer and you solve mazes’. Subjects were divided into two groups; one was paid $1 for every maze they solved, but with the other group the deal was different; the task was the same, but there was a competitive incentive. You had to compete with another participant. If you solved, say, 10 mazes and they solved 15, they got proportionally more money (e.g. they got $20 and you only got $5). The Q was this: would M in the competitive situation solve more mazes than M in the non-competitive one? And what about W?

No answers yet… 🙂  The researchers then posed another interesting Q: let us say that M perform better in the competitive condition. Is this because of ‘nature’ or ‘nurture’? To find out they ran similar studies * in one of the most patriarchal cultures of the world (the Masai in Africa) and in one of the very few cultures (the Khasi in India) which is in some ways female-dominated. The Khasi society is matrilinear and inheritance flows through mothers to the younger daughters. Would the results turn out to be different?  They were. You can see them in the chart below.

Here is the researchers’ conclusion: ‘Our study suggests that given the right culture, women are as competitively inclined as men, and even more so in many situations. Competitiveness, then, is not only set by evolutionary forces that dictate that men are naturally more so inclined than women. The average woman will compete more than the average man if the right cultural incentives are in place’. [Gneezy, U. & List, J. “The Why Axis” Random House 2013 – pp. 52-53] 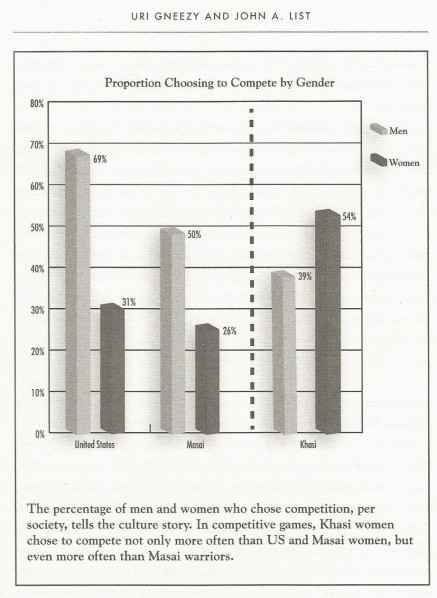 ( * The task used in Africa and India was a different one [throwing tennis balls into a bucket from a distance of 3m, but this is not relevant; what is important is the difference in performance in the two experimental conditions).