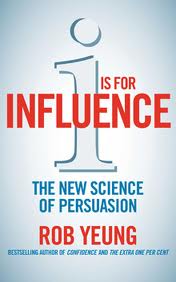 Incredibly, from an informal survey I did, this book does not come up among the top 5 on how to the science of persuasion – but it should! The book’s easy-to-read, humorous, direct style might suggest you can finish it in a day or two, but not if you want to make notes of all the important stuff!

Yeung builds on the work of the great Cialdini, but he adds an extra layer by giving us findings from recent fMRI research for instance and by including a host of short vignettes and examples from the world of business. As for the relevance to us teachers, the examples abound! Here are a few:

In a simple yet elegant study (p. 254) researchers asked random passers-by to take part in a market research. About 75% of them agreed. On another occasion however, the figure went up to 90%! How did this happen? Easily; research assistants simply added the words ‘You are free to accept or refuse’! (Moral: Pointing out to students that certain assignments are optional avoids triggering ‘Psychological Reactance’).

In another experiment (p. 110) students were asked to read a form asking them to volunteer sometime in the future to help with an awareness project in local schools. Once again, there were two groups. Out of those who agreed to come, 17% of the first group turned up, but the number soared to 49% in the second. Why? Well, members of the second group had to tick a box in the form signalling their agreement! (Moral: to ensure consistency, get students to agree to do things [e.g. H/W] and actually write down themselves what they have to do!)

Motivation of course if a major concern for us teachers. In a brilliant study (pp 190 – 192), Business students were given a text to read. Some were told it would help them with their ‘personal development’; others that it would help them with their future career. The results: not only did the ‘intrinsic motivation’ group do better than the second one (by about 24.5%) but they also showed a long-term interest in the topic to a far greater degree than the others! (Moral: we may be tempted to ‘sell’ activities to our BE students using ‘extrinsic’ reasons, but intrinsic motivation is far more effective).

Yeung writes convincingly and unpretentiously. He has a special knack for pointing out the implications of the research and the wide applicability some of the findings have. Here is a final example (p. 68): Do you remember that market survey study? In a similar situation, compliance numbers soared from 40% to a staggering 70%! The reason? Research assistance had been instructed to touch passers-by lightly on the arm… (Moral: to ensure compliance, touch your students gently!)